Hello readers! It’s been a while since I wrote my last blog post (almost 3 months) and there are several reasons why I couldn’t. I’ve been traveling a lot and have had the opportunity to  deliver a project in the land of gold souks (UAE) as part of my day job. This was followed by the end of the quarter, Christmas and new year. Happy new year to everyone BTW. Hope everyone has started their year with positive thoughts and the year is progressing well.

I have had a great start myself, and I’m looking forward to getting a lot of things done in 2016. It’s that time of the year when new and returning members of #EMCElects #vExperts and #CiscoChampions are announced. This year I’m honoured to have made it to two of these prestigious lists. In the first week of Feb #CiscoChampion results were announced and I’m glad that I made it to the list for the second time. Thanks to the team at Cisco for their efforts in keeping the members of the community engaged all through the year with the #CiscoChampion podcast. I’m hoping I get to attend a lot, if not all of them this year. 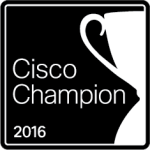 Last week the VMware vExpert 2016 list was announced and I’m humbled that I was named a vExpert 2016 and this is my third year in a row. The list has grown from 500+ in 2013 to 1360 this year. This shows that the community of experts are growing and this is just the start. I remember the days when VMTN had very few experts who would answer most of the questions.  Now, a question posted gets an answer in a matter of seconds! This only goes to show that, not only is the number of experts increasing but the growth is global. This year we’ve seen vExperts from many a different countries. Looking at the number of #vExperts I feel that the bar seems considerably low. That anyway is a whole different topic.

The announcement link can be found at : http://blogs.vmware.com/vmtn/2016/02/vexpert-2016-award-announcement.html

These titles come with a lot of responsibilities. Becoming a vExpert or CiscoChampion is intended to raise the bar on the quality of content one creates for the community. With that in mind, I will work harder than ever to up hold the quality in all the content I create this year and look forward to an awesome journey. I would like to take this opportunity to thank all my readers , friends and colleagues who either directly or indirectly have supported me and thus enabled me to achieve these accolades.