VMware Cloud on AWS is a hybrid cloud offering from VMware that combines the power of private cloud technology and the reach of AWS. It is an on-demand service offered to customers who are looking at running their applications on vSphere based public cloud environments. VMware Cloud on AWS is powered by VMware Cloud Foundation consisting of vSphere, NSX and vSAN for compute, network and storage virtualization respectively. With this service, customers can move their existing workloads to and from their on-premises to cloud environments without having to refactor them and also continue to access AWS native services that they currently consume. All of this and familiarity of management tools that they have been using to manage their on-prem environments.

Today VMware announced the availability of VMware Cloud on AWS offering in the AWS US east (N. Virginia) region. VMC on AWS’s initial availability was announced in the west region (Oregon) couple of months ago and has taken off really well among the customers who are looking to achieve use cases such as DC consolidation, extending on-premises DC etc. This announcement also introduces new use cases such as disaster recovery across regions. 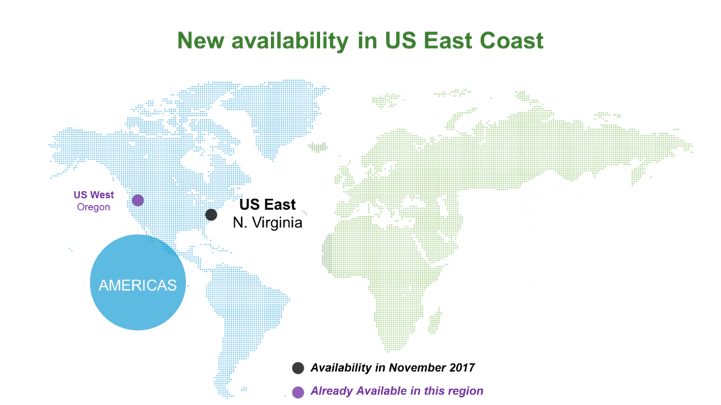 VMware also announced the preview of Hybrid Cloud Extension service (Previously know as HCX technologies) as an add-on to VMware Cloud on AWS. The Hybrid Cloud Extension was initially available with OVH and IBM. This service will help customers to move their applications VMC on AWS seamlessly and at scale. It enables customers to also move their workloads that are running on older versions of vSphere (5.x) to VMC on AWS. This will unlock the potential of use cases like data center consolidation where a large set of machines have to be moved form on-prem to cloud. It also provides the capability of data center extension by supporting layer 2 network extension on to VMC on AWS.

Another big announcement was around the availability of DRaaS offering backed by Site Recover Manager that protects workloads between on-premises and VMC on AWS and also between workloads deployed on different regions of VMC on AWS. This service is offered as an add-on to VMC on AWS and will be priced on a per-VM model. The service will be very useful for customers who are looking at reducing the cost of deploying a dedicated disaster recovery site which will a huge amount of CapEX and OpEX. It will also help customers who currently do not have DR plan or are protecting only a subset of VMs due to cost constraints.

Some of the other notable enhancements that were announced for VMC on AWS were:

Some of these features are offered as preview and are not available to all the customers of VMC on AWS.