Since the introduction of vCenter Server appliance (vCSA), there has always been a debate on which one is better (Windows based deployment or vCSA) and what one’s advantages over the other is. Folks at VMware have spent lot of their time and effort on making vCSA better and are committed to making sure all the features are available with vCSA in order to relieve the customers of the dilemma of choosing between the two. This is very evident with every release of vSphere. An increasing amount of customers are now convinced that vCSA is as good as (or better) windows VC in terms of scalability and are moving to appliance based deployments.

While most of the current deployments are based on windows, there was no one-size-fits-all approach to migrating from windows based VC to vCSA until the migration-assistant tool was introduced in the 6.0 Update 2m version. The migration-assistant tool makes it easier for the migration to be carried out without worrying about multiple components being affected in the process, better yet, an automated way of doing it minimizes the risk of losing important configurations like performance stats, logs and events.

In this blog post we will look at the steps involved in migrating a windows vcenter with an embedded PSC (minimal/simple install) to a vCSA 6.5. The binary can be downloaded from the VMware portal.

Once downloaded, mount the ISO onto the VC and run the migration assistant tool which is present under <Mounted Drive>:\migration-assistant\VMware-Migration-Assistant

Note that this has to be run on the windows VC and it will automatically detect the VC instance running on the machine and ask for SSO admin password.

Once the Administrator@vsphere.local’s password is keyed in, it will start running the scripts to do pre-checks

Once the prechecks are complete, the wizard then preps the windows vCenter to be migrated to the vCSA. This window has to run until the migration completes failing which the process will fail. 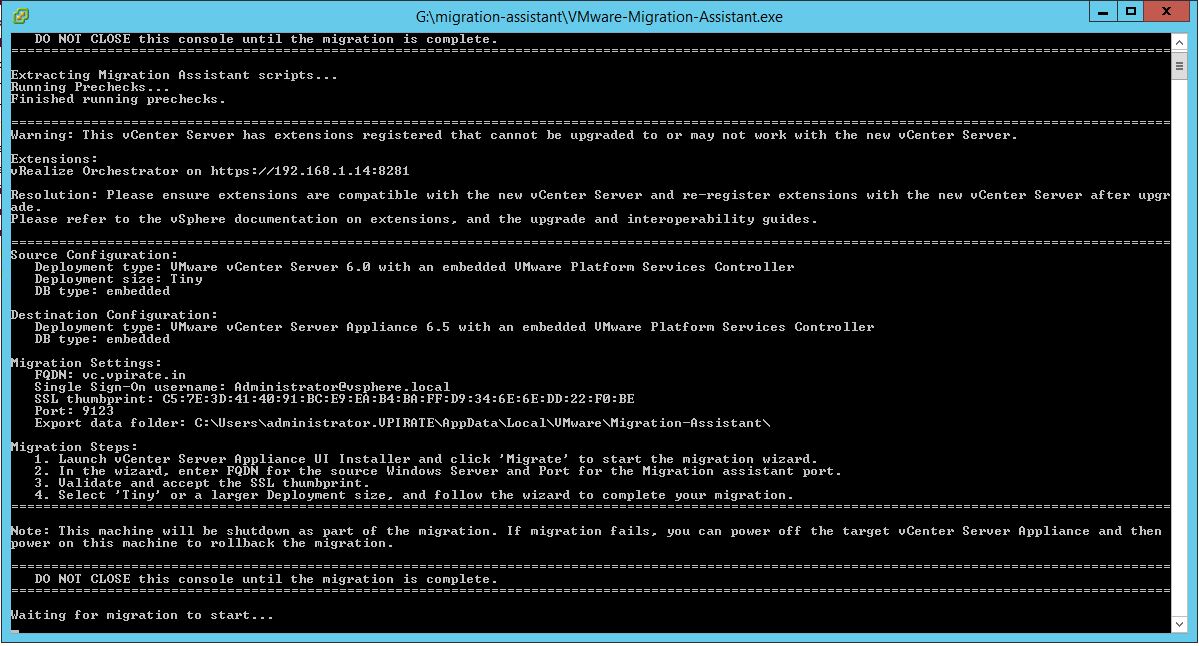 Now since one of the steps in migration is to power of the source VC and move it’s network identity to the newly deployed vCSA, the next steps of the actual migration process itself have to be run from any other machine which has connectivity to the source VC and the destination infrastructure to deploy the new vCSA server.

Mount the v6.5 ISO to the identified machine that meets the above condition and run the migration wizard by going to : <Mounted Drive>:\vcsa-ui-installer\win32\installer

Once the below wizard pops up, click on Migrate 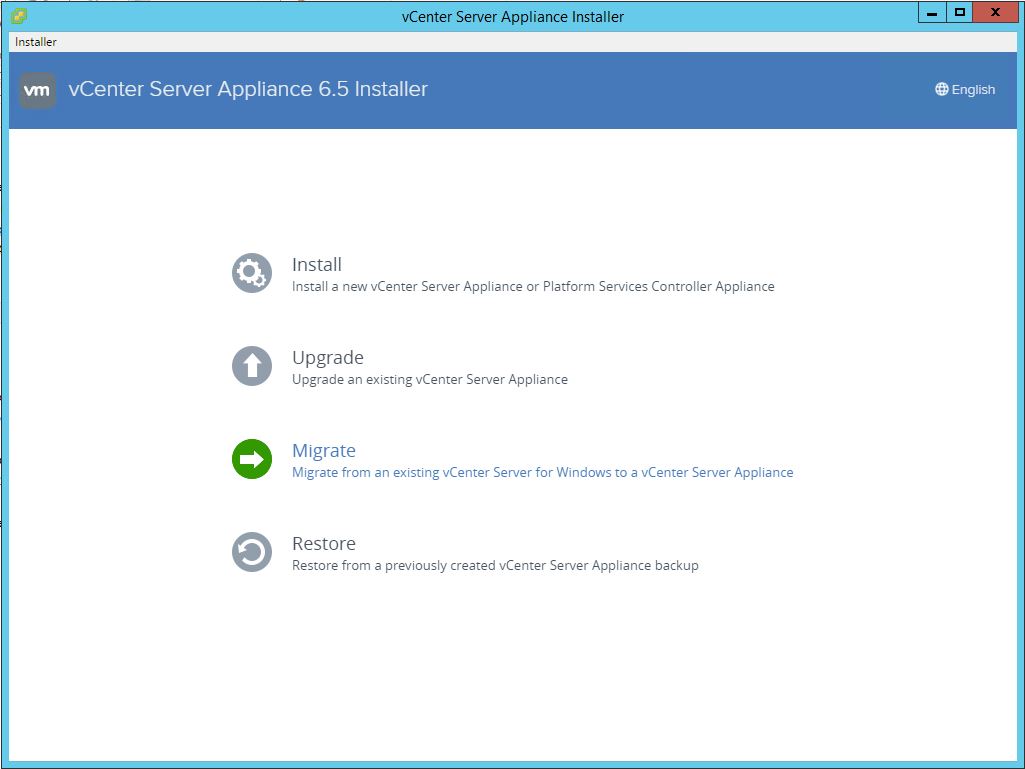 This starts another wizard that starts the deployment of the vCSA appliance. This again is broken down into two stages. The first one involves deploying the appliance and the second one involves configuring it 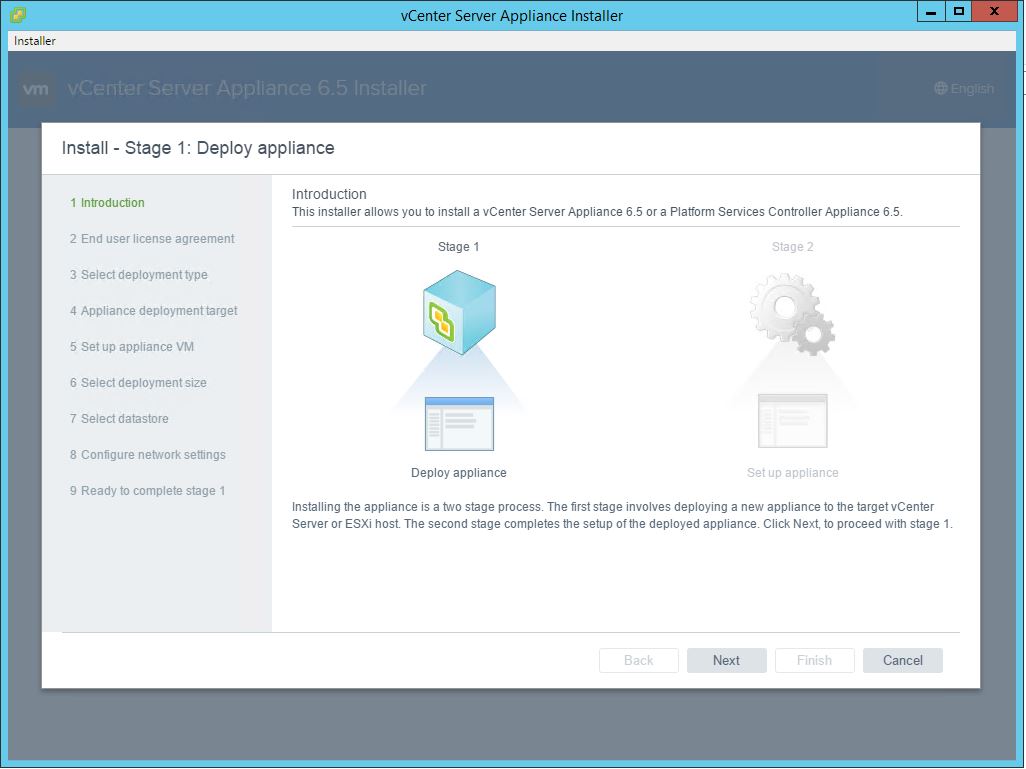 Accept the EULA and continue. 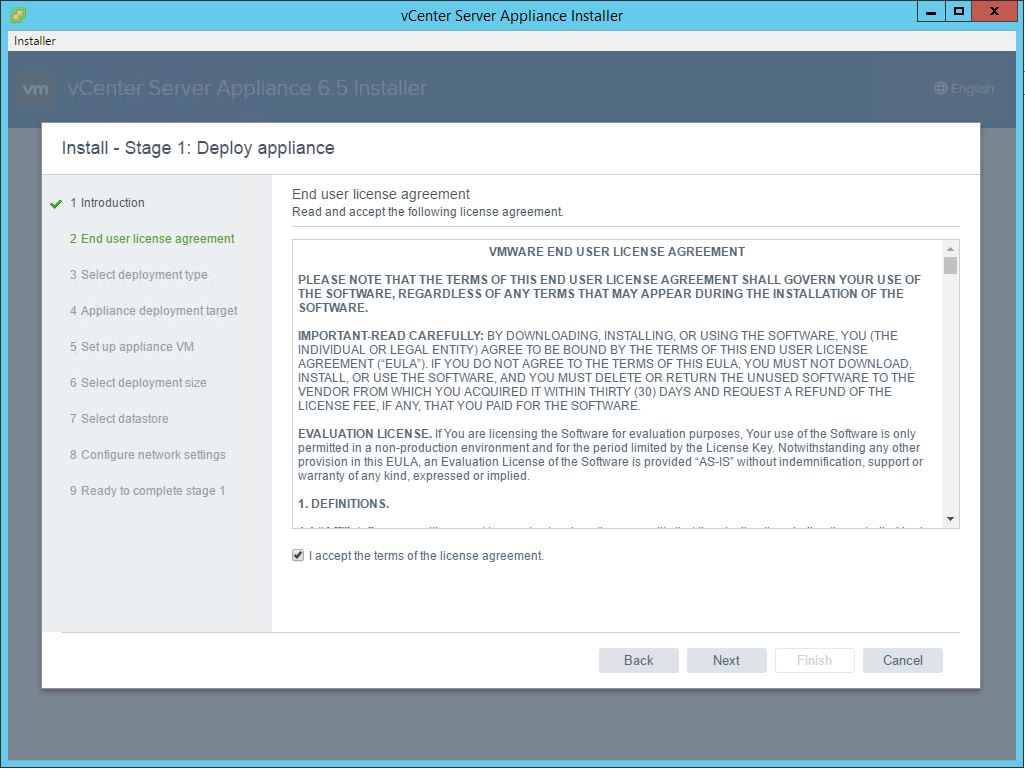 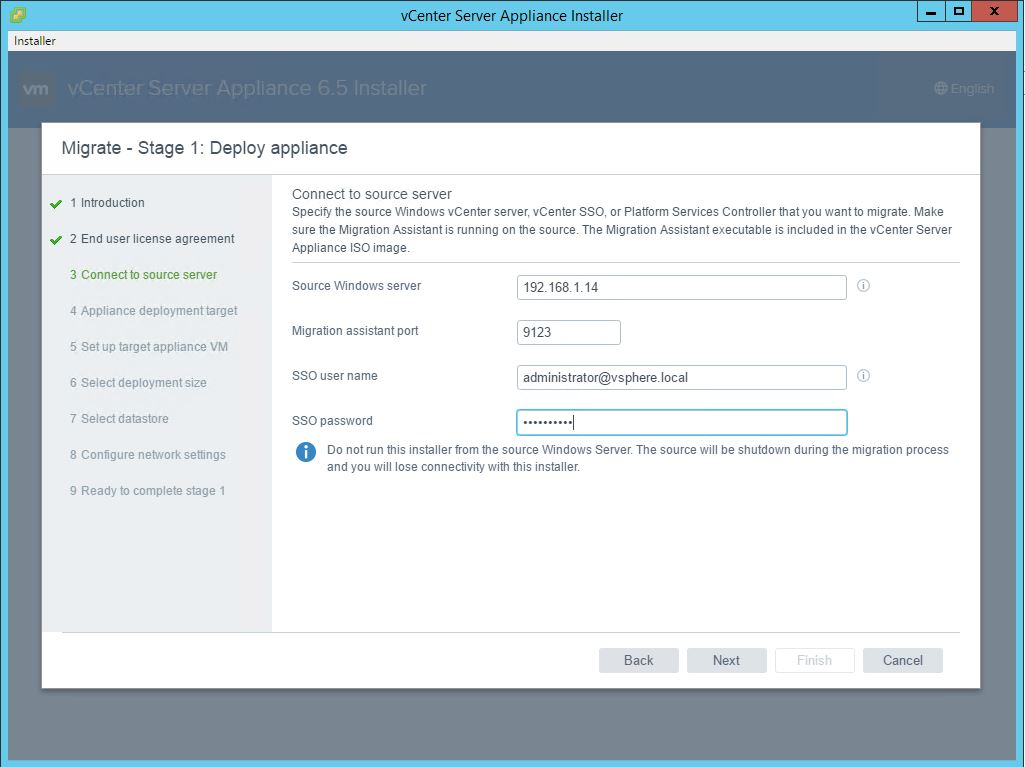 When the wizard establishes a connection to the source VC, it presents the certificate thumbprint which has to be accepted to proceed further. Click on Yes and continue. 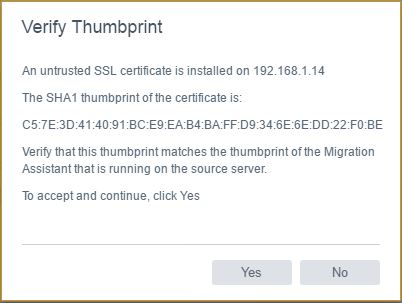 The next step is to provide the details of the destination vCenter or the ESXi Server where the new vCSA will be deployed. 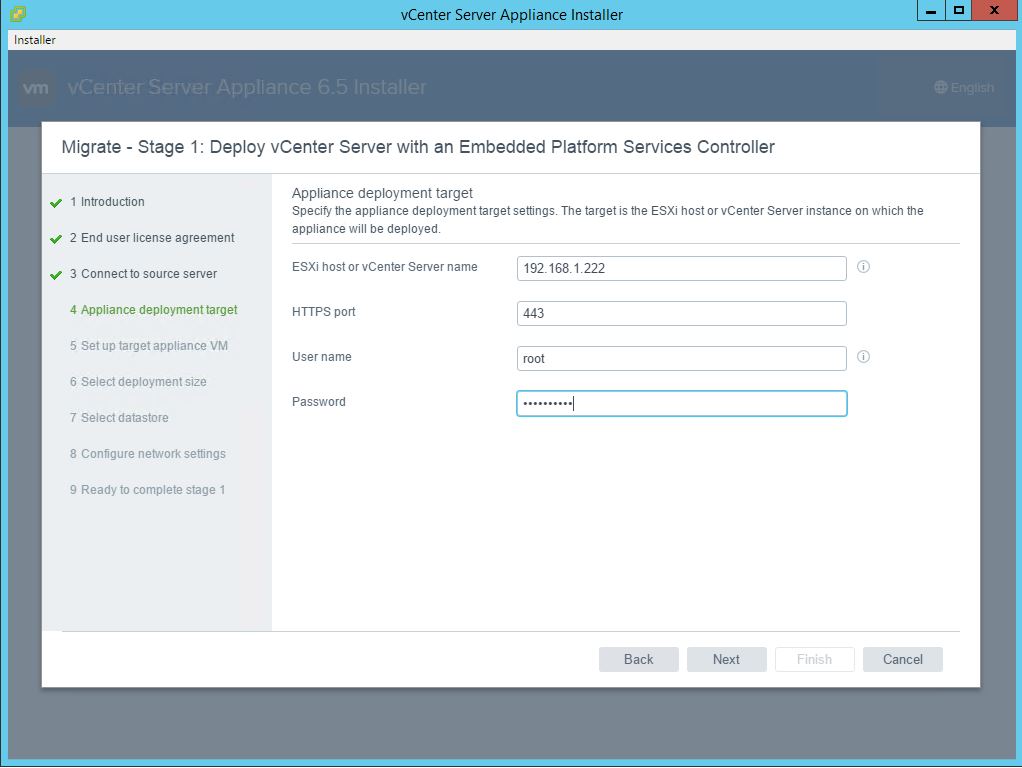 Accept the certificate thumbprint and continue 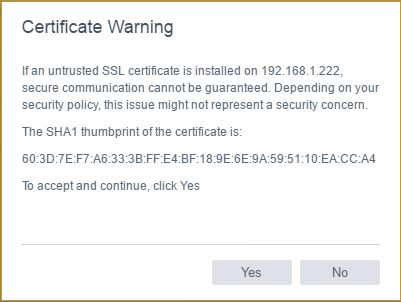 Specify the VM Name and root user password for the vCSA 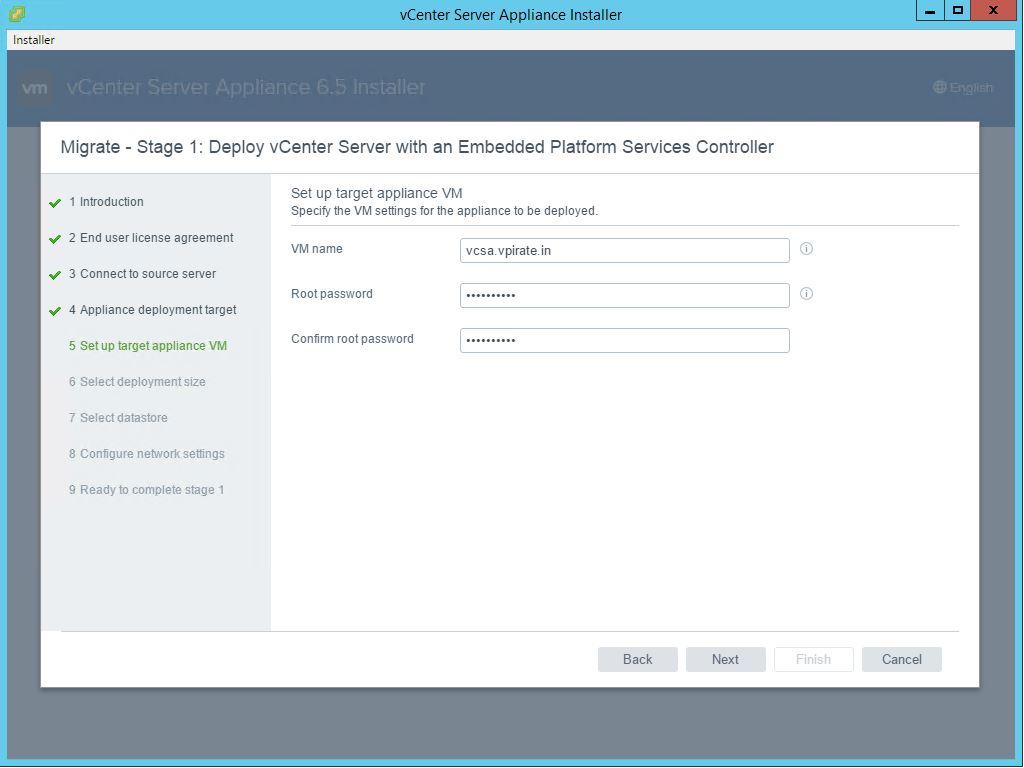 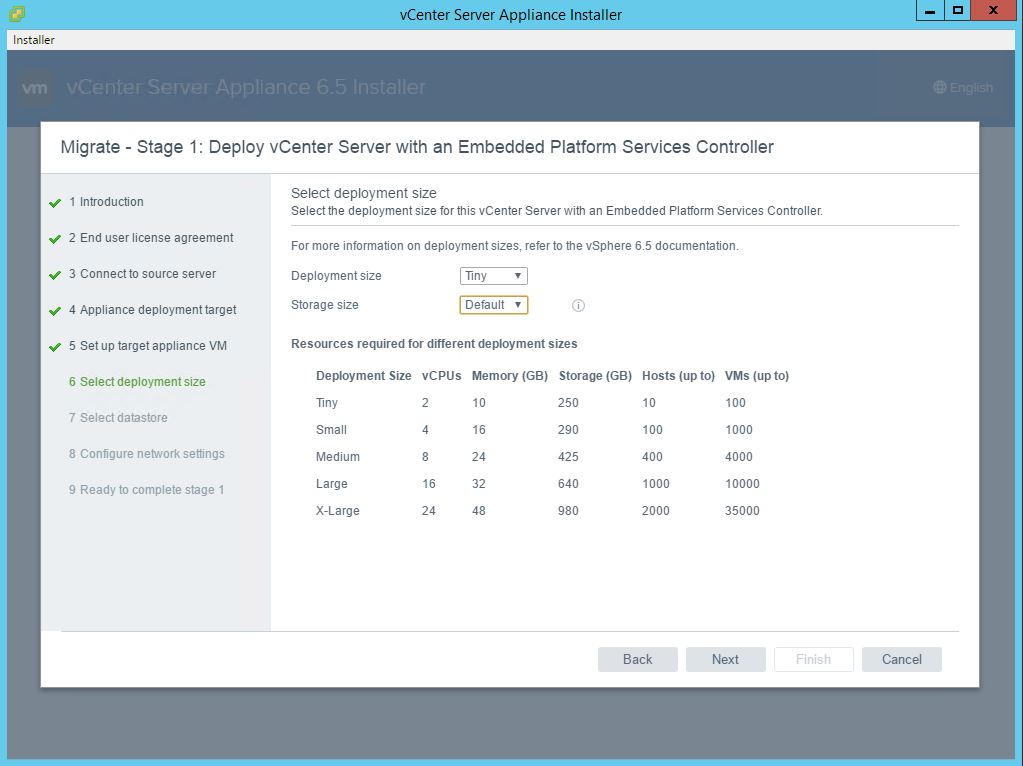 Select the datastore where the vCSA will be deployed, choose thin disk if required 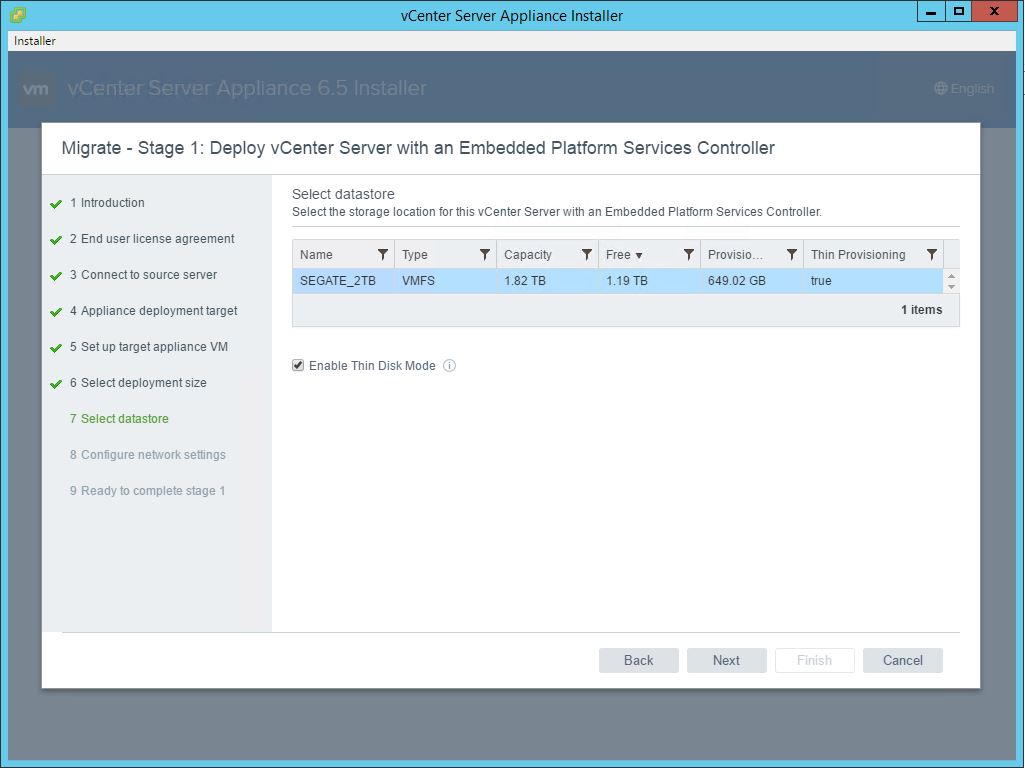 In order to have an IP communication with the source vCenter, the deployed vCSA will need a temporary IP during the migration phase. Once the migration is complete, the network identity of the source VC will be assigned to the vCSA 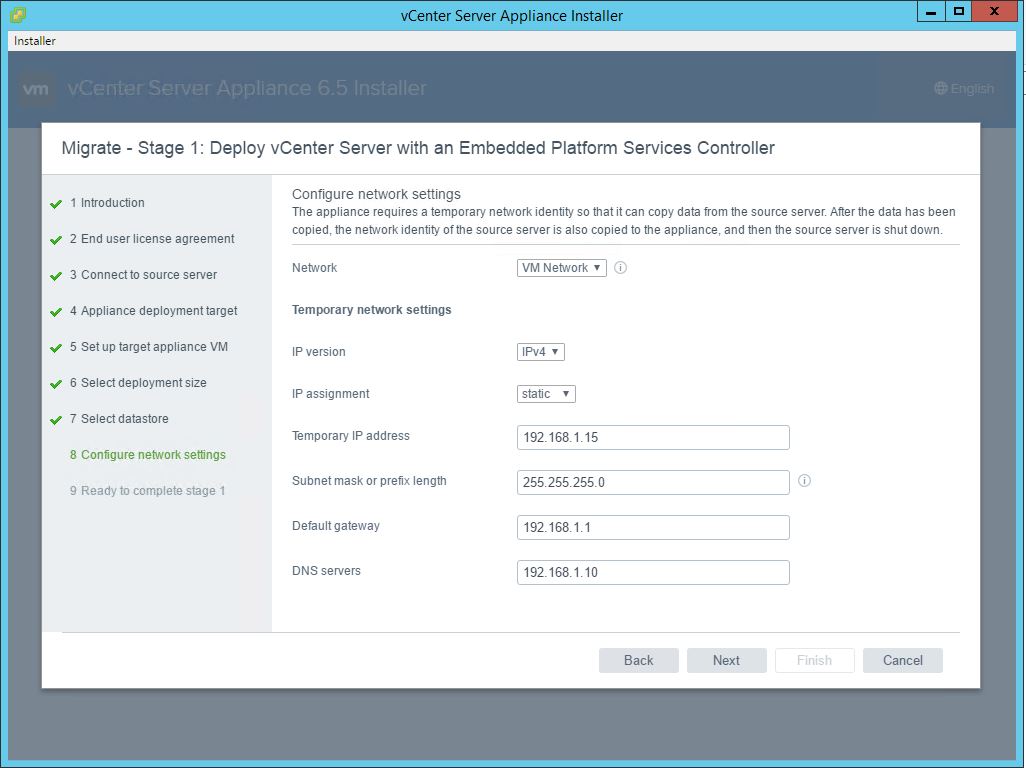 Review and Finish. This will start the deployment of vCSA 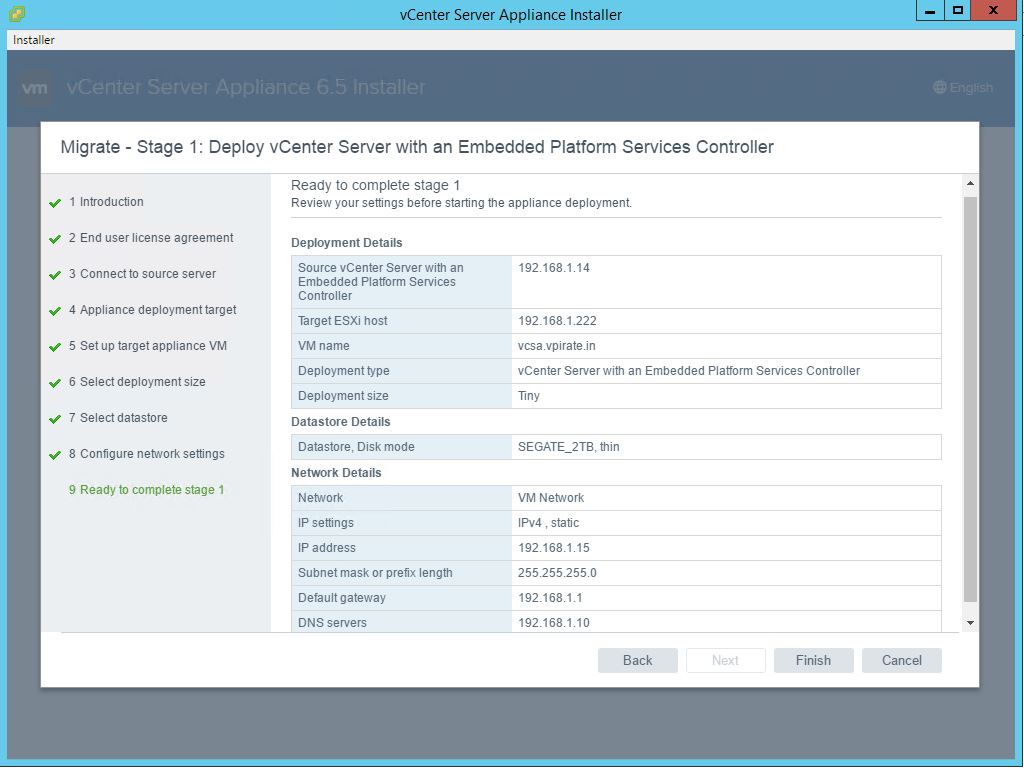 This will kick-off the deployment process 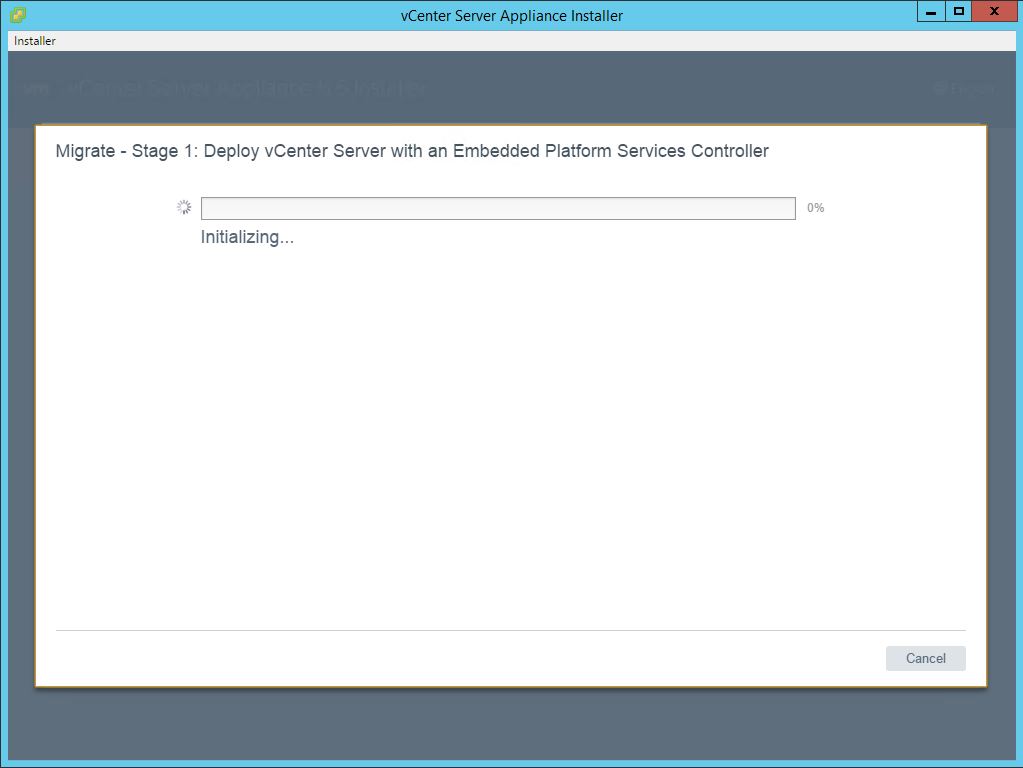 Once the stage 1 is complete, the appliance configuration will start 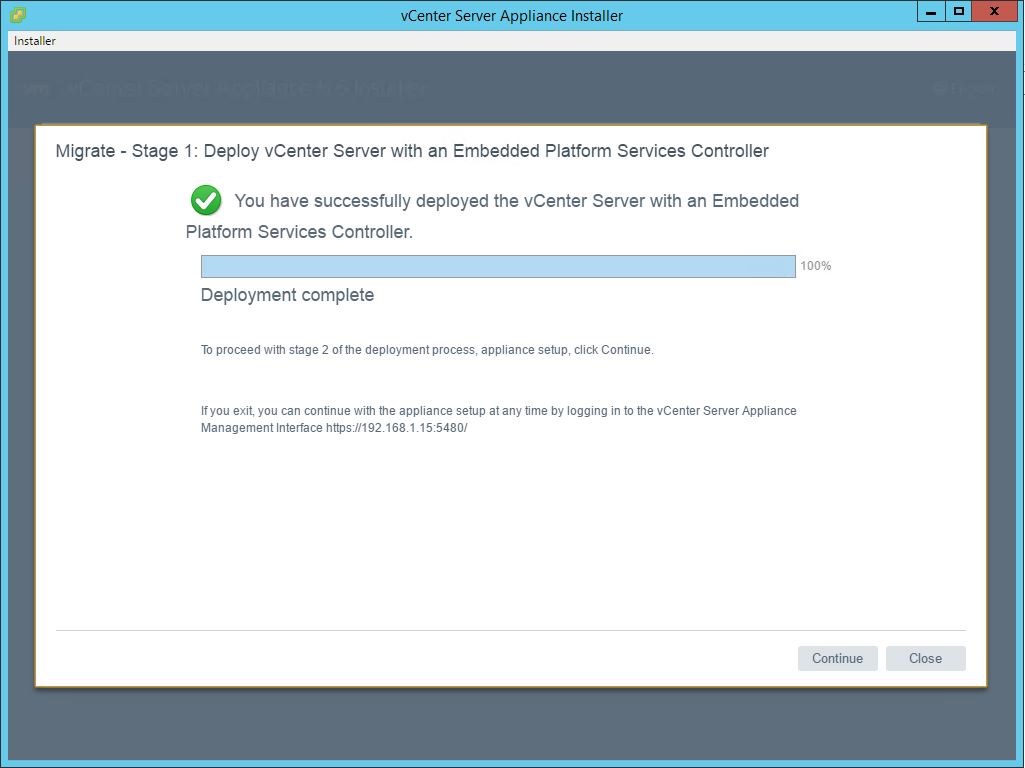 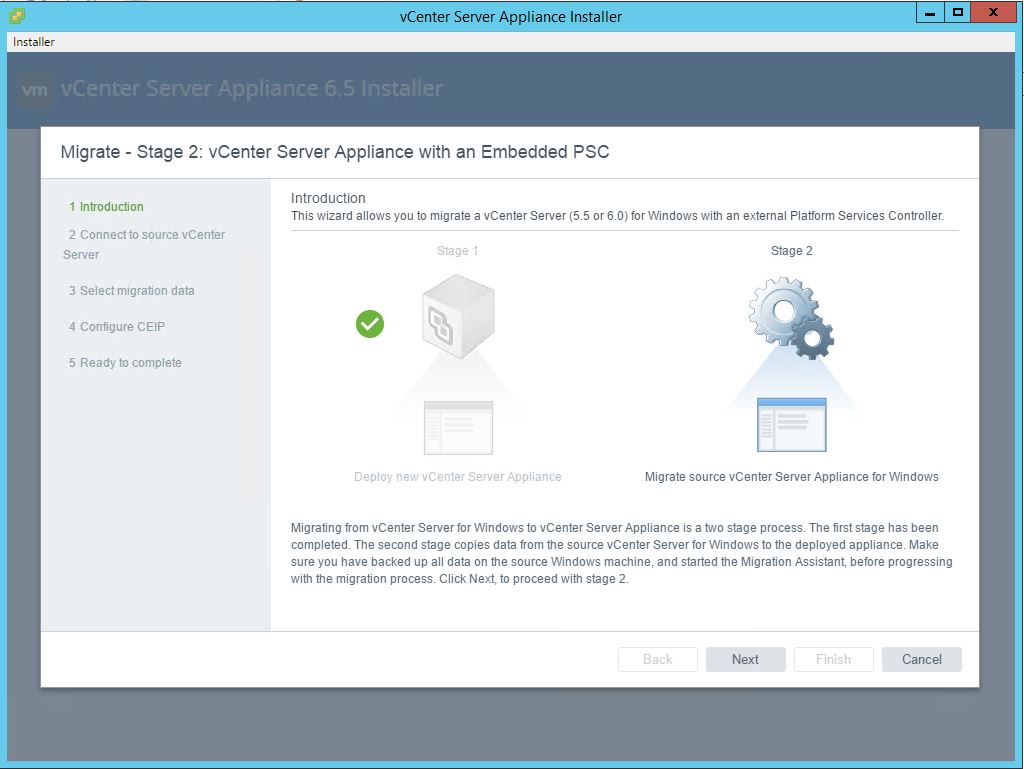 When you click Next, the pre-migration process kicks in 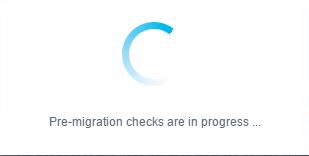 This checks the compatibility with all the components and extensions that are registered with the source vCenter and the vCSA once the migration completes. I have an older version of vRO which might not work with the new one, hence the warning. 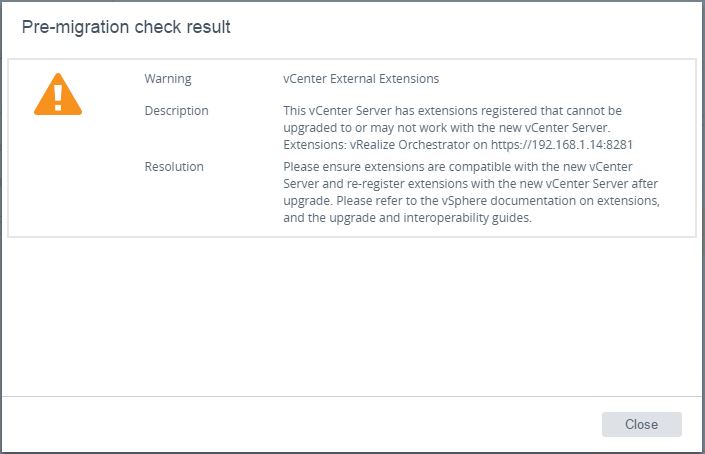 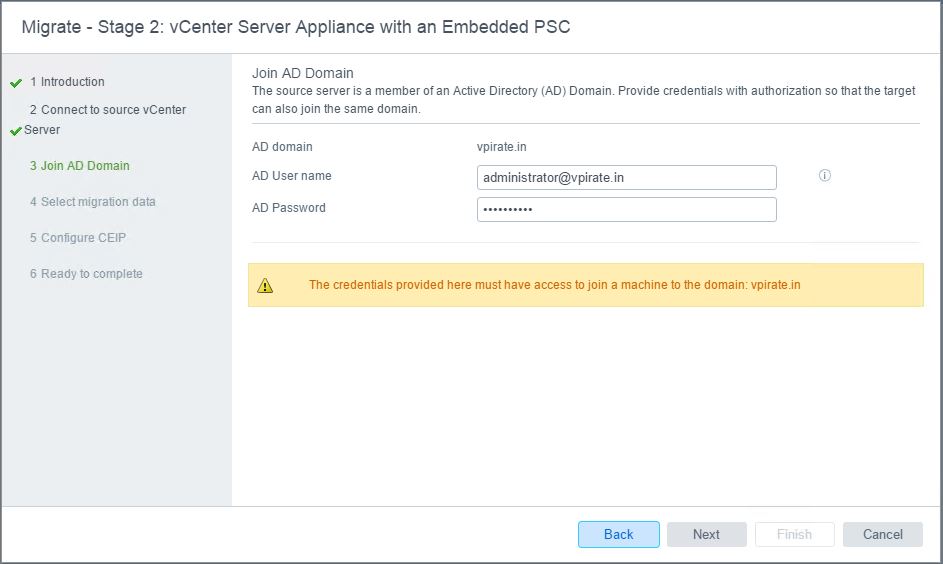 In the next step, the wizard let’s us select the data that needs to be migrated from the source to destination. This can only be configuration or everything including events, tasks and the performance data 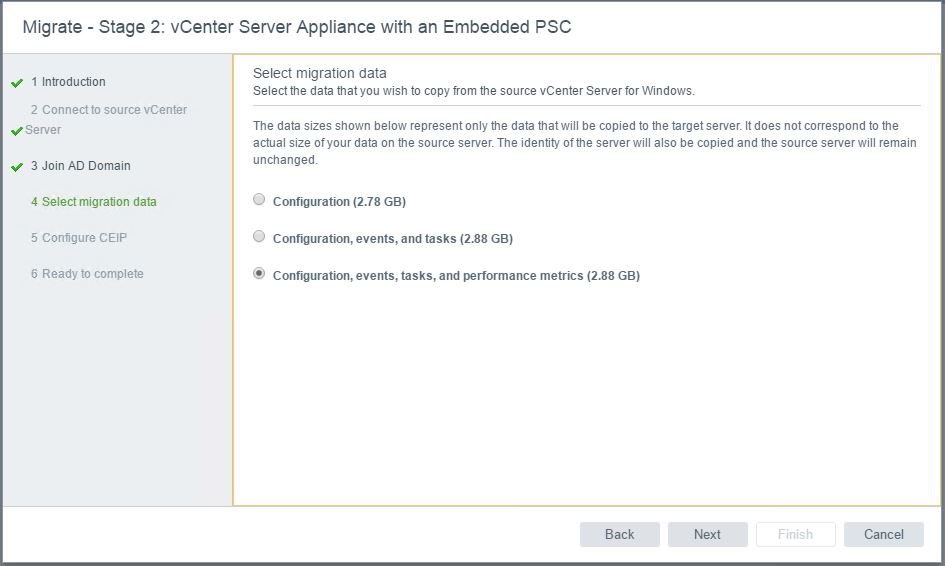 Once that is completed, you can optionally join the CEIP. I usually skip this 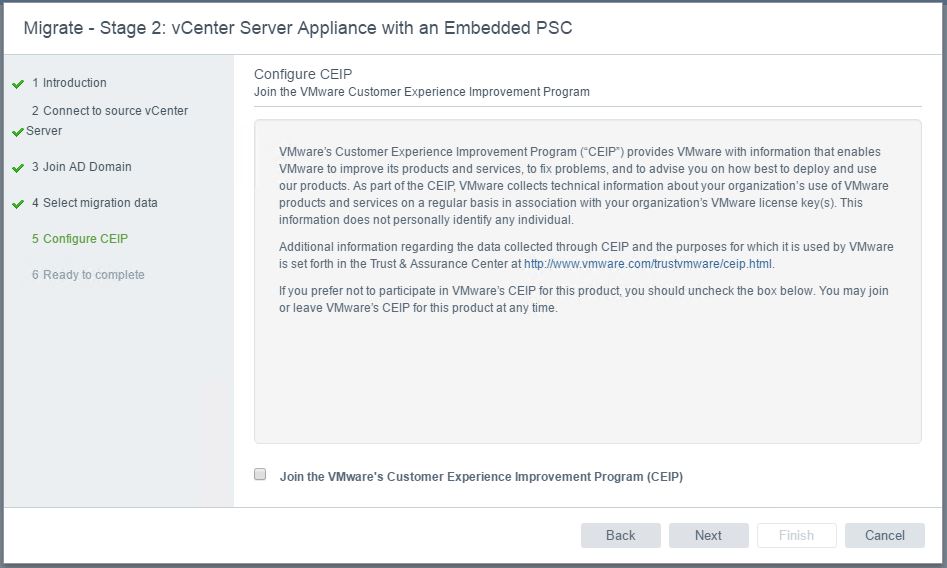 Confirm the details and start the migration 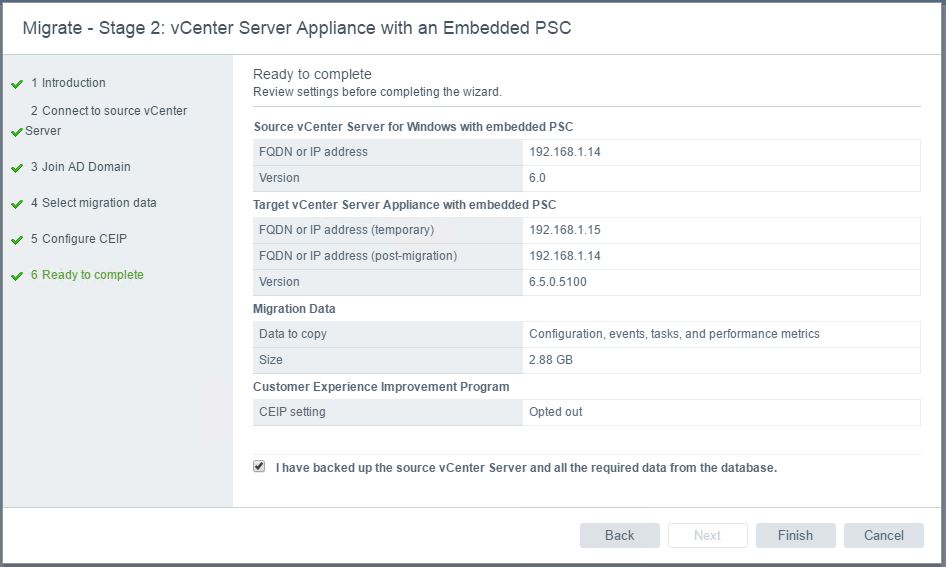 Note that the source VC shutdown during the migration as it’s network identity will be migrated to the vCSA. Also, this is the exact reason this wizard should not be run on VC as the migration status will not be known if the machine shuts down 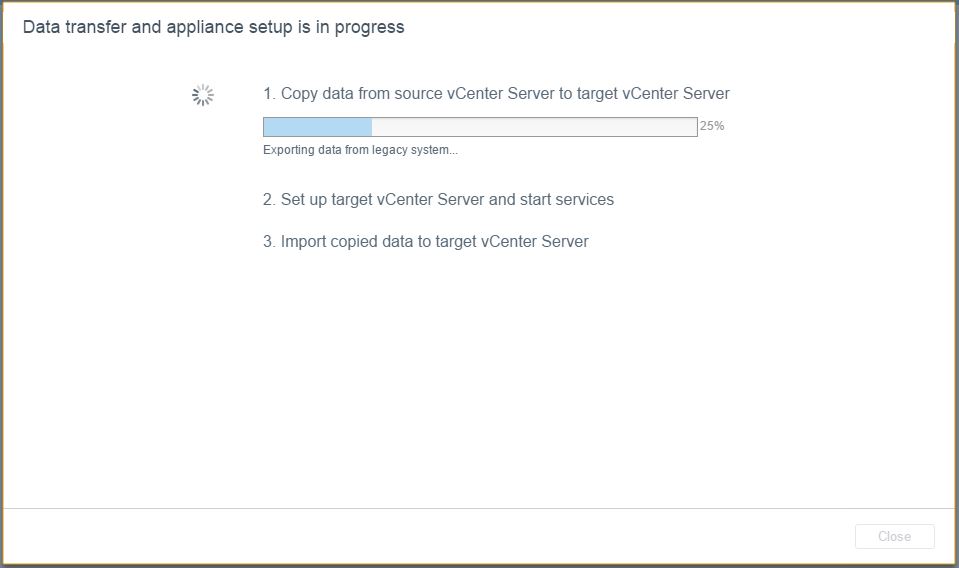 Once the copy is complete, the machine is configured with the required services and data is imported 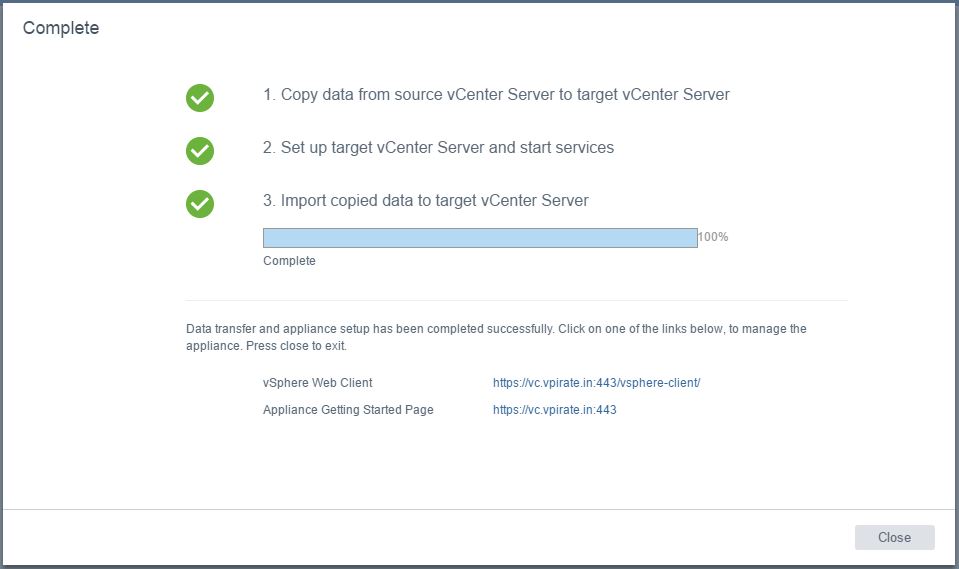 The impressive thing about this method of migration is that it preserves everything from source to destination. You can see that even the certificates are imported and applied on the vCSA. And another good thing is the shiny new UI that the new vCenter is built on 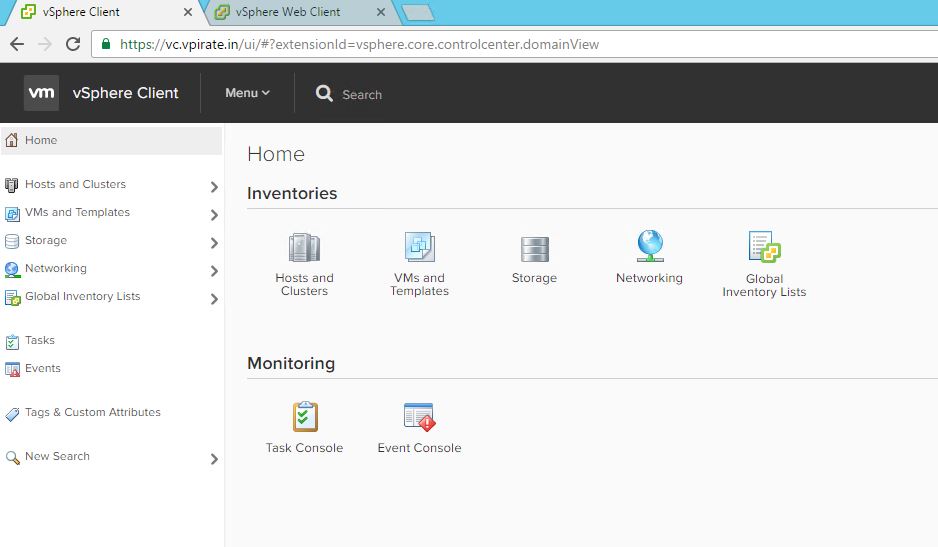 Try this in your lab/ dev environment and let me know how it goes.